Toshio runs a garage workshop that opens right into the home he shares with his wife, Akié, and their
cute-as-a-button daughter, Hotaru. Trouble arrives when Toshio hires Yasaka, a friend with an unsavory past
who’s in need of a break.
spotlight on upi 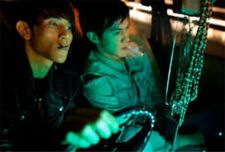 Nugi and Ipang are best friends in their youth who share a passion for music and spend their days at the record store, rebelling together from the traditional institutions that suffocate their rock and roll dreams.

An extraordinary young couple struggling to survive between passion in music, money matters and drugs
addiction. A love-hate relationship between themselves and the rest of the world.


Jarot and Ale are friends who grew up together since childhood, sharing the same history and background
but very different in character. They eventually created gangs with pals Lukman, Sadat and Jago: Serigala
Terakhir a.k.a Last Wolves, together they aspire to be the most powerful mafia gangsters.
spotlight on kan lume 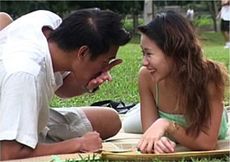 
Lynn, a radio reporter and magazine writer, is writing an article about Leo. However, the handsome and
famous sports star Leo is more interested in tempting Lynn than being interviewed

A film on finding emotional release from depression, unfolds through first-person narration by actress Faye
Kingslee, who struggles to overcome a traumatic past, and attempts to heal by travelling to Ayers Rock in
the Australian outback.


​Best friends Ariel and Olivia’s getaway to Johor Bahru takes a turn when Olivia’s boyfriend Jiawei decides to
tag along. As the trio explore the city with Ariel’s young cousin Bob, their emotions come to the fore, and they
are forced to grapple with the magnitude of their decisions.
spotlight on eric rohmer


A shy maths graduate takes a holiday in Dinard before starting his first job. He hopes his sort-of girlfriend will join him, but soon strikes up a friendship with another girl working in town. She in turn introduces him to another young lady and thus the quiet young lad finds himself doing some tricky juggling in a territory new to him.
iranian independent


A mystery drama slasher telling the story of a group of university students camping at a lakeside
for kite-running competitions, all through a without-a-cut single shot. It is inspired by the true story
of a restaurant that served human flesh in northern Iran at late 90s.


A portrait of an artist whose exceptional approach to art and life, defines him as
one of the most ardent admirer of life itself. This film is 76 minutes and 15 seconds
of undiscovered moments of Kiarostami’s life and work.

Iranian auteur Abbas Kiarostami takes his camera to south of Italy and shows
us this beautiful and playful black and white movie of alleys and stairs.
kinodocs

A documentary on the Indonesian hip hop scene and the community that has grown over the years. Blackbook is a tribute of respect to the pioneers, the artistes, and dedicated to the future generations: "Cause we can't, we won't...and we don't stop!" 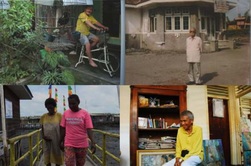 An exploration of the range of emotions that often goes unnoticed when visiting Kaliurang, one of the oldest mountain resort areas near Yogyakarta, shown through the old villas and its caretakers, the people who live there, oral and written history, old photos, works of literature.

Wasis, an educator in the New Order regime and pioneer of Jam Belajar Masyarakat education movement in Yogyakarta.

A documentary by two Acehnese high-school students nominated for best documentary at FFI 2016 about the harvest failure of a Aceh Gayo coffee plantation due to infertile soil at 1880 MDPL (meters above sea level) and how the plantation farmers of Merah Jernang village must seek new plantation grounds at a lower altitude.

In the 1960s, young artists created a collective called Sanggar Bumi Tarung. When national tragedy strikes in 1965 and all traces of leftist idealism are persecuted, Bumi Tarung members were jailed or executed. This is a documentary about remaining
artists of Sanggar Bumi Tarung: old, idealist, survivor and very much alive, their ideas of freedom and justice transferred into art.

Mama Yakoba is a traditional midwife in Papua, who comes to help when paramedics have predicaments to do their job due to lack of facilities. To support her life she usually hunts for kakaba, a Papuan Crab.


Toshio runs a garage workshop that opens right into the home he shares with his wife, Akié, and their
cute-as-a-button daughter, Hotaru. Trouble arrives when Toshio hires Yasaka, a friend with an unsavory past
who’s in need of a break.